Humans are the most intelligent species found on Earth. The ability to learn, understand, imagine are the qualities that are naturally found in Humans. Developing a system that has the same or better level of these qualities artificially is termed as Artificial Intelligence.  Before talking about AI hype, let’s go through brief history of AI.

The beginning of modern AI started when the term “Artificial Intelligence” was coined in 1956, at a conference at Dartmouth College, in Hanover. Government funding and interest increased but expectations exceeded the reality which led to AI Winter from 1974 to 1980. British government started funding again to compete with the Japanese but couldn’t stop the 2nd AI winter which occurred from 1987 to 1993.

The field has come a very long way in the past decade. The 10s were the hottest AI summer with tech giants like Google, Facebook, Microsoft repeatedly touting AI’s abilities. 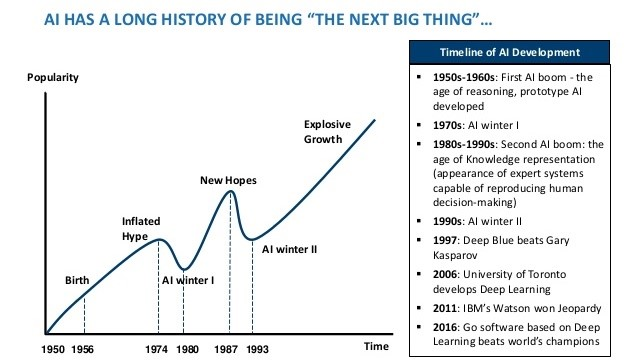 After the development of higher processing power like GPU, TPU in 10s, Deep Learning made huge jumps. Neural networks offered better results than other algorithms when used on  the same data. Talking about the achievement because of Deep learning, Alexa and Siri understanding your voice, Spotify, and Netflix recommending what you watch next, Facebook tagging all your friends in a photo automatically are the remarkable one. With the continuous progress in speed, memory capacity, Quantum Computing performance of AI is being enhanced gradually. Simulations that usually take months are available in days, hours, or less.

Albert Einstein had once said, “The measure of intelligence is the ability to change”. AI, which started in the 1950s,  is aimed at creating a machine that can imitate human behavior with great proficiency. And the question is how AI handles things beyond Human’s imagination? Apart from all the achievements so far in the field of AI, expectations are unreasonably high rather than understanding how it works. Most of the Tech leaders excite people with claims that AI will replace humans but the reality is we do not have the ability to create an AI controlling a robot that can peel an orange.

In recent years, there’s been intense hype about AI but we aren’t even near living up to the public expectation. Self-driving cars and health care are currently the most hyped areas of artificial intelligence, the most challenging and are taking much longer than the optimistic timetables. AI is still in its infancy, but people are expecting amazing advancements in the next few years like in movies.

Business-oriented companies are brainwashing or stimulating customers by using AI as a marketing term. Companies deploy some small AI project in their products in a commercial setting. Nowadays, AI is being forcefully tagged in consumer products, like AI Fan, AI fridge, and even AI Toilet.  The below picture shows the use of “Artificial Intelligence” in marketing and related key terms.

AI is gaining more attention among students and researchers. But, people still don’t realize that they can’t become an expert using stuff like PyTorch, TensorFlow etc. Implementing built-in models with frameworks like Keras, Tensorflow, and Scikit is not unique and special, especially, when we are following an online tutorial and simply changing the data to ours. Coming up and understanding the things behind those architectures is extremely hard. We need a full understanding of probability and statistics, information theory, calculus, etc to just grasp the main ideas.

AI components are made up of mathematically proven methods or implementation which are coded to work on data. The use of AI depends upon the type of problems they are designed to work on. If ML doesn’t work for you, it’s because you’re not using it right, not because the methods are wrong.

A routine job that doesn’t require a brain is sure to be replaced by AI. It’s not going to close the job opportunity but will open the different sets of skilled jobs. Let’s take an example of self-driving cars.  General Motors, Google’s Waymo, Toyota, Honda, and Tesla are making self-driving cars. After its success, drivers’ jobs will disappear but new job roles of creating and maintaining them will open. Humanity has to evolve towards being more intelligent and it’s the right time.

We currently call AI as Big Data & Machine Learning. We are focused on finding patterns and predicting the near future trends but AI completely fails when it comes to generating explanations. Reality is, we can’t still trust the decisions of AI in highly-valued & highly-risked domains like finance, healthcare, and energy where even 0.01% accuracy matters.

With all things taken into consideration, it is sure that AI hype will gradually decrease when people realize we are still using “pseudo-AI”  where the fact is humans are operating AI behind the scenes. Though AI has been bookended by fear, doubt, and misinformation, AI hype doesn’t seem to come to an end sooner.

NEXT TUTORIAL : BEGINNERS GUIDE TO ML

4 Comments on “IS AI OVERHYPED? REALITY VS EXPECTATION”

Hey! I need the link of the dataset which you have used. I have dm you on instagram.